On November 13, Rector of Osh State University  K. G. Kozhobekov received a delegation from the Institute of Foreign Languages ​​in St. Petersburg. At the head of the delegation, the president of the institute, I. I. Alekseev, rector M. V. Pimenova, and vice-rector for development A. N. Bakirov congratulated Kudaiberdi Gaparlaevich on the successful election and the new post of rector of one of the country`s leading universities.
Marina Vladimirovna Pimenova thanked for the hospitality, and noted the prospects for cooperation between the two universities. In turn, the rector Kudaiberdi Kozhobekov told the ways of mutually beneficial cooperation in the field of education and culture: academic mobility, distance learning, advanced training, the organization of summer schools, joint scientific activities, etc.
After the negotiations, the bilateral cooperation agreement was signed, which we hope will bring fruitful and long-term cooperation.
For organizing this meeting, we thank S. Sh. Kalygulova, Dean of the Faculty of Foreign Languages ​​and World Cultures. 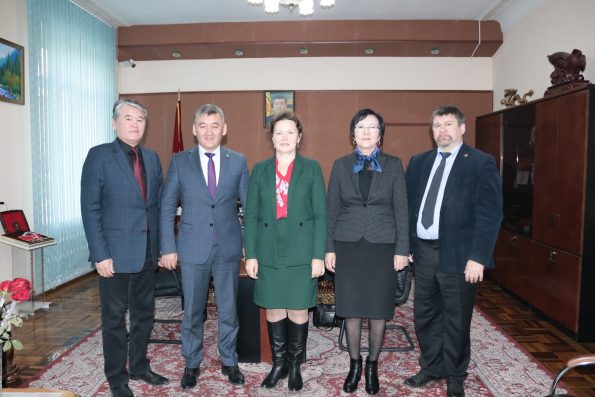